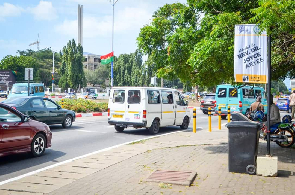 Posted at 09:55h in Announcement, Blog by admin
0 Likes
Share

The rate at which public litter bins placed at vantage points in the capital are being stolen is thwarting efforts by public-spirited individuals, civil society groups and city authorities to make Accra clean.

Out of 40 public litter bins placed at vantage points by the OneGhana Movement, a thought leadership and social action non-profit organisation, 11 have been stolen.

The bins were deployed on April 24, 2018, the day the group launched the Adopt-A-Bin campaign.

Location of the Litter Bins

They were deployed along the Independence Avenue – From the Barclays Club House to the Ridge Roundabout, and from the Conference Center through to the Ministries enclave.

Executive Secretary of the OneGhana Movement, Emily Kanyir Nyuur, stated that Jekora Ventures Ltd., which partners the group to monitor the bins, first noticed the theft of the bins and in less than four months, she added that eleven bins had been reported missing.

According to her, Jekora Ventures Ltd. through its investigations found two of the stolen bins in some homes.

She stated that occupants of the houses where they were found claimed to have bought the bins from people they could not identify.

Miss Nyuur explained that the OneGhana Movement has to spend money to procure seven new bins to replace some of the stolen ones, bringing them to a total of 36.

Out of the 36 bins, she stated that public spirited individuals have adopted 20 and all the maintenance and servicing costs associated with the adopted bins.

To adopt a bin, the Executive Secretary said one has to make a one-time payment of GHC477 made up of GHC255 for the bin and printing on the bin, as well as GHC222 as the cost of the locking mechanism to prevent theft, as well as the flagpole for advertising opportunities.

In addition, she said anyone who adopts a bin has to pay a monthly cost of GHC100 for the maintenance and servicing component. The bins are currently emptied twice a week.

The initial contract was for once a week as is the general practice across the city.

However, the waste management company, Jekora Ventures, increased it to twice a week after realizing that the waste generated at the locations were substantial.

Miss Nyuur announced that the OneGhana Movement has purchased 40 extra bins in storage for deployment.

She has, therefore, appealed to individuals and organizations to adopt a bin, adding that they would only be required to pay for the locking mechanism and the monthly servicing charges.

The concept of this campaign is under the RightWay Initiative (a socio-cultural and behavioural change initiative aimed at impacting and adjusting the attitudes of citizens to seek to do things right and in the interest of Ghana) of the OneGhana Movement.

OneGhana encourages individuals and corporate bodies to ‘Adopt-A-Bin’ to be placed in public spaces.

The plan is to work with the Metropolitan, Municipal and District Assemblies (MMDAs) throughout the city; as well as the waste service providers within each jurisdiction to ensure that bins adopted and put out will be lifted and waste properly disposed of to help fight the sanitation menace we are faced with.